Monumental savings have arrived at Royal Palm Toyota! We’ve got amazing clearance deals on some of the hottest 2017s on the lot, including the Camry, Corolla, RAV4, and Tacoma.

The 2017 Toyota Camry is sticking to its roots and producing yet another great vehicle that you and your family are sure to love. It has both a strong engine, a 3.5-liter V6 that produces 268 horsepower as well as a spacious cabin that will ensure your kids stay comfortable throughout the ride.

Not only is the new 2017 Toyota Camry a great time to drive, it is also one of the safest vehicles on the road today thanks to Toyota’s Star Safety System™. For those who are not as familiar with this new technology as others, it includes a plethora of features that promise a safe drive for you and your loved ones. Come on down today and check out the all new 2017 Toyota Camry at Royal Palm Toyota.

Toyota fans around the world have always loved the Corolla due to its versatility and sporty reputation. While the Corolla is still a great car to own and drive, Toyota is switching it up a bit for the 2017 model. The new trims look more like the SE and XSE all the while still performing at that classic Corolla level that fans have come to know and love.

The 2017 Corolla comes with a 1.8-liter four-cylinder engine that has a four-speed automatic transmission, a CVT automatic, or a six-speed manual option, and produces between 132 horsepower and 140 horsepower. Its mpg is also expected to stay the same, estimated between 27-30 mpg city/36-42 mpg highway*.

The Toyota RAV4 has long been a fan favorite from Toyota and this years model is no different. With the perfect blend of a sedan and SUV, this crossover is sure to make an impression on the road. It is a unique vehicle in that it can handle just about any terrain but also gets fantastic gas mileage. Getting *23 mpg in the city and 30 mpg on the highway, the 2017 Toyota RAV4 is no bulky SUV. Come down today and have a look, and a test drive, at the all new 2017 Toyota RAV4.

Toyota is releasing its brand new 2017 Tacoma with a some new upgrades that you should be excited about. There are two exciting new engine trims that back up the power of the 2017 Toyota Tacoma. The first, bigger option is a 3.5-liter V6 engine that can produce 280 horsepower, and the other is a 2.7-liter 4-cylinder that churns out 160 horsepower, each operated by a 6-speed automatic transmission. Whether it be off-roading or driving to work, the 2017 Toyota Tacoma is an impressive truck and one you will want to show off. 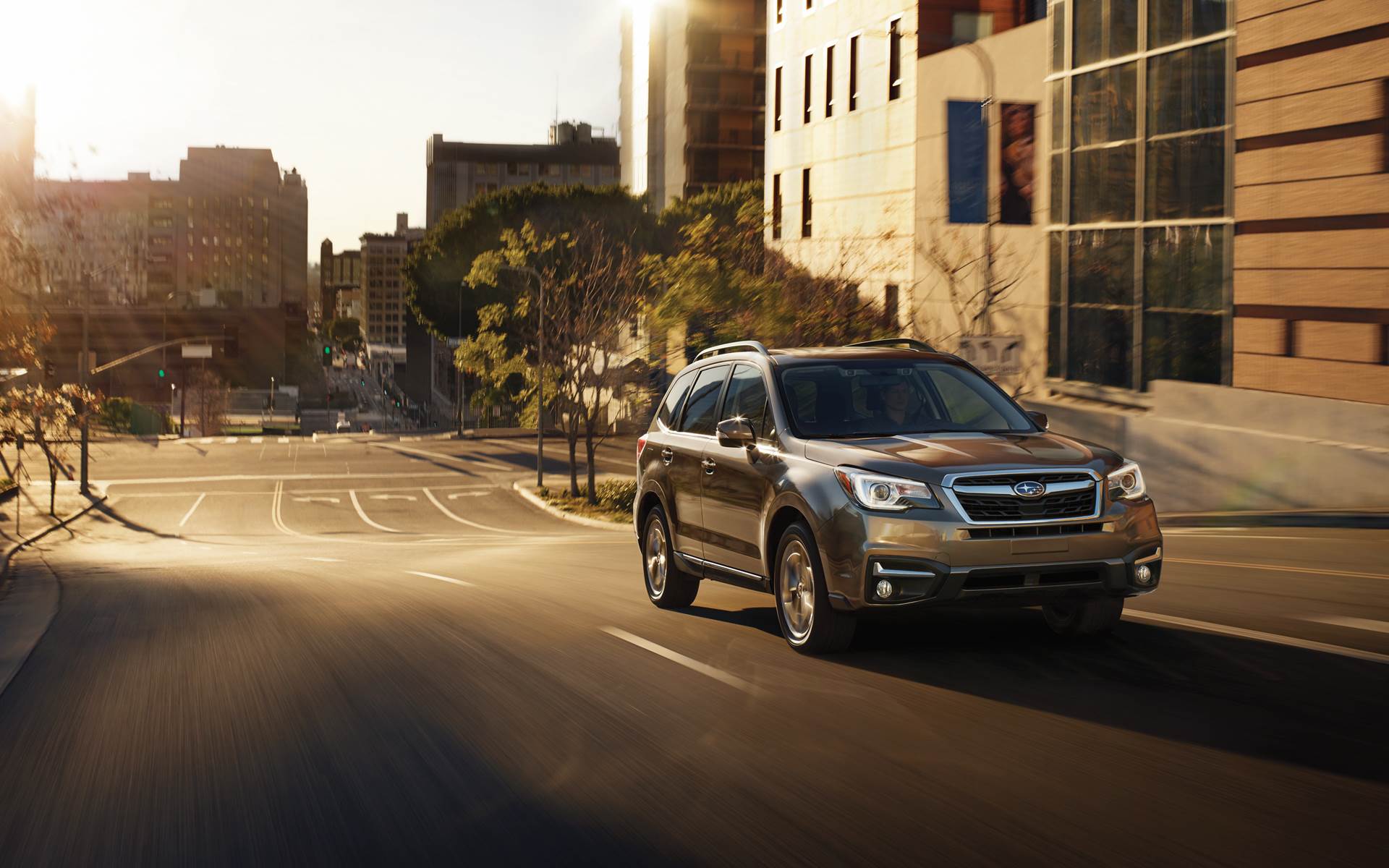 The 2017 Toyota RAV4 and the 2017 Subaru Forester are among the top picks of nearly every automobile magazine for compact crossovers: they do a ton of things well, don’t sacrifice on space or amenities and are simply a great value for the money. Yet while it may seem difficult to pick between the two, a more well-rounded package is available if you opt for one over the other.

What You Get Inside

Ease of use is just as important as the technology that many car makers are sure to include in compact SUVs like the 2017 Forester and the 2017 RAV4. However, the designs of the cabin are different, and as such it can be a bit of a squeeze trying to fit into the Subaru. Once inside, both are admirably spacious, but thanks to the refresh, the Toyota stands out in terms of build quality, as well as fit and finish.

Even though the Subaru is known for versatility, the RAV4 still leads the segment in terms of cargo space, whether the seats are folded down or not. A power liftgate adds a nice touch when packing in heavy items as well. The Toyota also benefits from engineers working to continuously improve the Entune interface, improving the interactivity of GPS and smartphone systems, as well as app integration.

Toyota’s Safety Sense system is standard on all 2017 RAV4 models and includes standard frontal collision mitigation, blind-spot monitoring and lane-departure warning. A version of this, EyeSight, is available on some Forester models, but you have to pay more, and then pay even more than that for automatic high beams and some other features.

Although the 2017 Subaru Forester is a fine choice amongst compact crossovers and many people enjoy it, the 2017 Toyota RAV 4 is the superior option thanks to its standard front-wheel drive, standard safety features and overall value proposition.

Visit our showroom today to learn more about the leading compact SUV that best fits your needs.

The Toyota Corolla‘s standard safety features chart a new course for safety in a sedan. These include:

– Front and rear side curtain airbags

These are of course but a taste of the abundance of safety features that the new Corolla has to offer. With the addition of the latest safety technology, you can have even more peace of mind while you’re behind the wheel of your Corolla!

Visit us today to learn more about the 2017 Toyota Corolla‘s tremendous safety features and to experience this outstanding vehicle for yourself.

The 2017 Toyota Highlander and Honda Pilot have gone head-to-head in a tight match-up of two of the most popular SUVs. But the Highlander has set itself apart as the strongest contender for 2017.

Under the hood, the Highlander boasts a 3.5-liter V6 engine that is paired with an 8-speed automatic transmission. The greatest improvement that has been made for the 2017 model is the inclusion safety technology like forward collision prevention and auto emergency braking.

The Toyota Highlander comes with an impressive 21 mpg* in the city and up to 27 mpg* on the highway, as opposed to the Honda Pilot’s 20 mpg* in the city. 1 mile may not look like too much of a difference but over a long period of time, things add up, especially the cost at the pump.

Toyota has for decades put safety first in all of their vehicles, assuring that you and your family get to where you are going safe and sound. While Honda values safety as well, they are especially focused on entertainment this year and that is where the 2017 Toyota Highlander sets itself apart. We encourage you and your family to come visit us today and take a look at all of the great things the 2017 Toyota Highlander has to offer.

Entune 3.0 is also equipped with a mobility feature that includes remote start, remote locking, remote unlocking of the car, and the option to set parameters for drivers. If the driver exceeds the parameter, the owner is notified on his or her phone.

One final and exciting feature of the Entune 3.0 units is that they offer a slew of useful, entertaining apps like iHeartRadio, Yelp, Pandora, and Slacker.

This new multimedia system will be featured in some of Toyota’s new models starting at the end of this year.

Toyota’s futuristic Concept-i vehicle has been unveiled, and here’s everything you need to know about this new ride. The innovative design and sleek shape of the Concept-i bring to life the mystifying technology that you’ve seen in your wildest dreams. Toyota has also included an artificial intelligence program named “Yui” that is designed to integrate with the driver.

Toyota designed the interface to display a visual representation of “Yui” that is able to communicate to a global audience, and the comforting interior emanates around the driver and the passenger in order to surround them in lights, sounds, and touch controls to communicate information with “Yui.”

This invention has been created to bring vehicle and driver closer together. The warm and friendly demeanor of “Yui” is embedded into the vehicle to make driving more fun, practical, and enjoyable, and it’s able to communicate while the Concept-i is in automated or manual driving.

“Yui” is able to appear on the exterior door panel when the driver and passengers are approaching the vehicle as a way of saying, “hello!” Communication about navigation and warnings of potential hazards is also exchanged. In addition to “Yui” appearing on the door, the headlights of the Concept-i blink when you approach the vehicle, surely a small but nice feature to have.